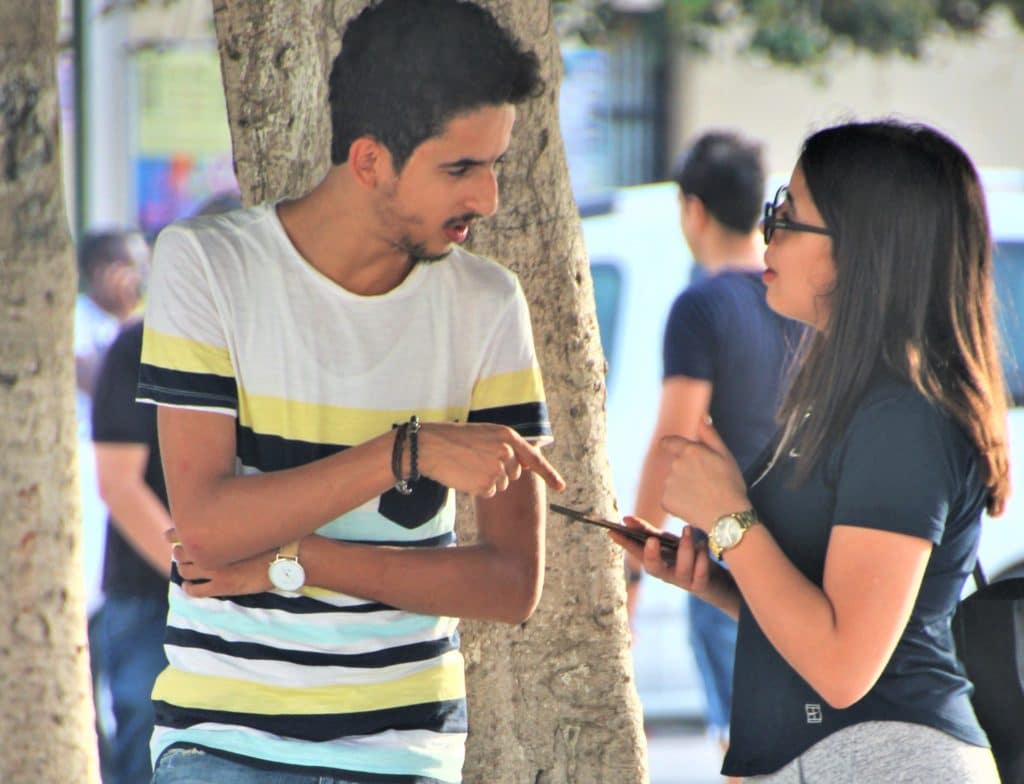 Why does she spend all her time on her phone and not with you?

Houston we have a problem. A communication problem.

If you’ve clicked on this article then I can safely assume you know what I’m talking about.

Your wife or girlfriend spends way more of her time on her phone than she does with you. And it bugs the hell out of you.

You’re a decent guy. You don’t need much…

A kiss in the morning. A hug at night. And a little recognition that she enjoys spending time with you when you’re with her.

But instead you get 30 seconds of distracted half-hearted conversation between messenger conversations.

This was my story too.

I couldn’t work out why she spent so much time on her phone.

My head was churning through all the possible reasons as to why she’d rather interact with her device than with her hard working, loving husband!

And the more I thought about it, the more I had a knot in my stomach that something wasn’t right between us.

We used to be so open and affectionate with each other. But now when I went to give her a kiss, she’d turn so it landed on her cheek, or even decline altogether. WTF!

It took me a long time, a lot of soul searching and some hard reading to understand what was causing her to be so distant.

The constant phone use was a sign, but it wasn’t the cause.

I wanted to know what I’d done wrong. How could I fix it. What did she want me to do?

These all seem like the kind of questions any good, caring husband would be asking himself when faced with a lack of affection in his relationship.

But then I spent time understanding the affect my behaviour was having on my wife.

You see, even though I didn’t complain about her phone use, I was communicating my frustration to her in all my interactions.

This was a hard truth that I had to learn.

When I finally understood it, I asked my wife whether she could tell when I was frustrated with her, and yes, she confirmed, that in a variety of different ways, she could always tell.

And because she knew that I was upset without knowing the reason why, she couldn’t feel close to me.

She couldn’t be affectionate toward me. Not when I wasn’t being honest with her.

I thought I wouldn’t complain about her being on her phone and how it bothered me because that would cause confrontation and the chances of her being affectionate towards me after confrontation would be less…right?!

And the phone…well that’s just the easiest way for her to exit a situation where she feels uncomfortable. For her, leaving the room might cause confrontation, but the phone is a soft exit option. A way of leaving without leaving.

So What’s Really Going On?

If you have a concern or frustration with your wife and you don’t raise it with her, there’s a very clear message she’s receiving from you.

That you’re fearful of something. It could be:

Or a combination of all of them…on rotation. And it causes you to play small. To tiptoe around her hoping it’s not true.

All you want is some affection to confirm that everything is OK.

But when you’re in that place of always analysing, trying to be helpful and kind all the time, even when there’s something eating at you…she CANNOT feel attracted to you.

What Can You Do?

The first step is to stop analysing what she’s doing and what she’s thinking about you.

By focusing all your attention on what she’s doing, you’re smothering her.

Make a decision that you will only interact with her when you’re in a positive frame of mind. Show her the best of you.

Don’t watch to see what her reaction is.

Give her space and time.

Find some tasks that have been on your list for a while and make plans to get started on them.

What If Nothing Changes?

Then tell her how her behaviour makes you feel.

This is done in part by the words you use but far more by the way you communicate.

With a smile, kindly ask her to put down her phone and give her attention to you for a minute.

Be calm. Be honest. Don’t water down what you’re feeling.

Communicating your emotions is difficult but it shows a strength and commitment to the relationship that can be very refreshing and attractive to your partner.

Use words that show her you care. Embody the kind of love and affection you want in your intimate relationship.

When you show that you can communicate like this it can be the catalyst for a blunt and honest conversation between you.

That might sound like scary stuff, but it’s also hugely liberating and often the start of reconnecting in a way that will bring you closer together.

When I had this conversation with my wife it was uncomfortable at first but it has opened more honest and blunt communication – we understand each other better and we feel more connected again.

Which was the whole point.