Do you think divorce is not an option for you?  I have some information for you. 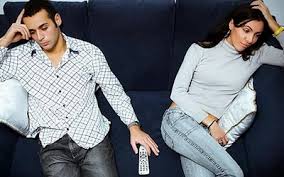 This article is rated R for Raw. It may sting a little.

I’m going to get right to heart of something you may have been struggling with.

If this isn’t your situation, consider forwarding this to a friend who may need to read it.

If this is your situation, it may hurt a bit. But it’s not like me to dance around the truth and mince my words with you. Everyone wants honesty – until you tell them the truth.

You know my intention is compassion. I love you, man.

I’ve heard a lot of guys tell their stories.

They talk about the pain, loneliness, fighting, and disrespect in their marriage. They desperately want more.

But some will say, “Divorce is not an option for me. What now?”

What do I tell this guy?

Because it is most certainly an option for HER. Take a look at the math.

So. Do you still think divorce in not an option?

What “Not an Option” Really Means

When a guy says this he is really saying his biggest FEAR is divorce.

He is afraid to lose his wife, his kids, half of his wealth, and the very core of what defines his own importance and value.

It is the FEAR which makes divorce impossible in his mind.

Fear. It is so strong it controls his every thought, word, and action within his marriage. The fear causes him to exist in a state of “just settling” for whatever happens in his marriage.

He avoids conflict, but frequently lashes out in hurt and anger. He goes along with plans he doesn’t like. He works at jobs that don’t inspire him.

He endures little or no intimacy with his wife. He decides that “Yes, dear” is the easiest path to keeping the marital boat afloat.

He doesn’t realize that his fear of divorce and the resulting wishy-washy energy is exactly what drives many women toward their decision to leave.

His doubt and uncertainty about how to please her makes her anxious and rebellious.

The downward spiral of resentment, anger, and judgment becomes an everyday battle between them.

She feels this energy as emotional abuse or neglect – the two most common reasons women give for initiating divorces.

How to Improve Your Odds

Looking back at the math, it would appear that putting yourself in the right 50% could prevent a lot of heartache.

How do you do this?

You do it with courage. Not fear.

Courage is the single most self-affirming conviction you can develop for yourself.

Courage and confidence are what most women crave from you.

The process involves learning more about yourself and what you most value and desire in life.

You must become crystal clear on your non-negotiable values and boundaries in your relationship.

You will learn how to communicate those values and how to defend them.

It takes courage for a man to admit he isn’t perfect and is willing to grow, learn, and become work in progress.

Your courage is what will allow you to give your loving gifts without waiting for permission or approval.

Courage is what will demonstrate your unconditional love and respect for her.

Courage is what allows you to express your sensuality without shame or apology.

Courage is knowing that you WILL have the life and relationship you deserve.

It IS scary to think your wife my not choose to join you in that life.

I’m pretty sure, though, that getting into the right 50% is much easier with courage than with fear.

This is What I Want for You

I’d like to help you get there sooner than later. Yeah, it’s a little selfish. I get great pleasure seeing a man take charge of his life and committing to a whole new perspective.

This most recent testimonial (below) is worth reading just for the inspiration. This could be any guy in the world. But it’s a real guy and a real story. I didn’t make this up – that would be a chicken shit thing to do, agree?

Let me know when you’re ready for that guy to be you. A free 1 hour chat is one way to start.  You can start the process with one simple email or use the “Let’s Talk” box on this site.  Or just pick up the phone and call.

As soon as we connect I will ask you if you have an hour to settle in.  I’ll ask you if you are in a private, comfortable place to talk.  I’ll ask you to take a deep breath so we can start getting REAL with each other fast.  The hour will go by super fast and your head will be swimming.  You will wish you wrote something down.  You will tell me that you feel a LOT better just by getting it out and realizing that you’ve got a lot of hope.

That’s exactly what Tom K. told me after our first contact.  Look at his progress so far.

As a result of Steve’s “masculinity tune up” program I identified areas where I need to “man up” in my marriage. Probably due to lack of my own dad’s example and mentoring on how to be a man, for the better part of my 11 year marriage I had been unknowingly exhibiting some boyish behavior in my interactions with my wife which I blamed her for (her “moods”, lack of interest in sex, physical and emotional distance, etc).

I too, had become angry and lashed out verbally at her and she was not feeling safe. I did not want a divorce but couldn’t imagine staying married the way things were, and basically had resolved to “get through it” for the sake of our three young kids.

I was pretty desperate for some change and stumbled upon one of Steve’s comments on Huffington Post and began reading his site. I was skeptical at first. I’m a confident, self-made, urban guy and I’ve never used a coach before but needed help and figured what the hell do I have to loose… let’s give this wife-whispering cowboy a shot. It’s not like I was going to talk to one of my recently divorced buddies about this stuff over a beer.

Through the “tune up” program I realized I wasn’t seeing my part in the problem, and the strength I had to change the situation by changing my own behavior. Steve’s coaching challenged me by revealing some of the things I was overlooking about my marriage, my wife’s needs, and pointed me toward a more manly response.

He gave me the inside track on what she was looking for as a woman and what she would respond to.

By following some simple guidelines, doing reading assignments, and having some very good long talks with Steve I started changing my behavior… and my wife responded. She opened up more. She started getting the emotional safety and security she needs and I was beginning to be able to have sex with my wife again.

Things aren’t perfect but three months later we’re definitely on the path to healing and I no longer feel like I’m sharing a bed with an angry roommate. There’s a spark again, we’re a lot more connected, and I think we both see the possibility of a long future together.

I don’t want to make this sound easy. There were some some big steps I needed to take toward her, and some ingrained reactions I am daily attempting to change. But I am seeing surprising results.

I’d very much recommend working with Steve if you’re in a rough spot in your marriage and need some sage advice from a wise dude. But only if you’re willing to listen, look at yourself, and possibly take some difficult actions. He’s a man’s man who’s not afraid to call you out on your shit.

But don’t be fooled by the cowboy hat, his advice is always given with the kindest of words, funny anecdotes about his own foibles, and the best of intentions. If you willing to go on the journey with Steve it’s a great ride.