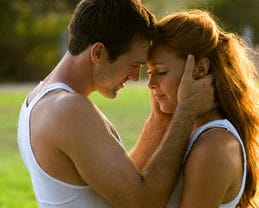 I’ll make this short and sweet.

Yep. That’s pretty much it.

I hear about stupid arguments and heavy conversations all the time. They are usually over the most ridiculous crap that somebody (you know who) has escalated into a grand jury trial.

Yeah, just like we did when we were kids.

But you’re not a kid anymore.

You’re also her LOVER. The ONLY MAN on this planet who is allowed to kiss her, hug her and make love to her. So act like HIM.

The best way to respond to ridiculous, controlling or critical complaints is though your lover energy.

This guy doesn’t defend himself because he doesn’t feel threatened.

This guy doesn’t get drawn into stupid arguments because he finds her attractive and amusing. She doesn’t scare him.

This guy doesn’t feel bad about himself just because she is pissy. He already knows he has stepped up to the plate and her issues are not his.

In other words, he’s good in his own skin and un-rattled by whatever is going on with her.

In this video, I explain more about the type of mature response you need and the mindset you need to adopt to feel strong and confident again.

The saying “happy wife, happy life” is a myth.

There are a lot of statistics out there that try to prove that if a man can just keep his wife happy, then he won’t get divorced.

Even John Gottman of the Gottman Marriage Institute says that 81% of marriages will end in divorce if a man does not learn how to accept his wife’s influence.

So what is a man supposed to do when he reads a statistic like that?

It makes you think “well geez, maybe happy wife, happy life is true…” But it’s not true. It’s a bunch of crap! It’s not what the statistic was meant to say.

THAT marriage will probably end in divorce – an 81% chance.

That doesn’t mean that you have to keep her happy in order to accept her influence. It means you need to listen.

So much of what I hear about are comments and criticisms from wives that come from a place of insecurity, fear and irritation. Complaints about how you clean the kitchen, how you pack the kids lunch, how you clean up the back yard, how you drive…how you’re doing everything!

There’s a way you need to handle controlling criticism versus constructive and contributing criticism.

I want you to learn to appreciate a woman who is being collaborative.  This means she is interested in contributing to the health of the marriage by talking about the different ways you might handle money or the different ways you might handle nutrition and fitness for the family, or different investment ideas, or any other ideas or comments or even criticisms that are really coming from a place of concern to contribute to the overall health of you, your family and your future.

Don’t take those as criticisms.

Try to see the difference between a woman who is providing really constructive input to your own well-being and the other type of poisonous, destructive comments which are coming from a place of fear and insecurity.

Comments that come from a place of fear and insecurity are often snarky and critical about you and how you’re doing the most inane things.

I’ve heard men relay arguments about how they cleaned the kitchen before bed and even how they wiped water droplets from a stainless steel sink! There are many types of comments that are meant to control or belittle or criticize.

What’s important is your response to those comments.

If the comments are constructive then you should engage with those comments in a conversation like a loving partner.

But a lot of guys don’t know what to do when the conversation is in a critical downward spiral about how you cleaned the kitchen or packed the lunch or something similar.

What I want you to know is that you have the ability to come from a place of masculine strength.

This is a lover energy. Where you don’t allow yourself to be put into the place of yet another child in the house who is being lectured or criticized about how to do something.

You’re a grown man. You know how to clean a sink in the kitchen.

If you didn’t do it perfectly to her standard, that’s not a big deal. If she’s criticizing you for not doing it exactly the way she would, then you need to respond by not taking offense like you’re a little boy. Not whining and complaining and getting defensive.

You have to get good at responding in a way that lightens the mood whenever she gets controlling or critical or condescending in a way that makes you feel like you’re being placed in a lesser role, that you’re on a lower pedestal than she is, that she’s now treating you like a little kid who’s being lectured.

You have to move into your lover energy.

A lover doesn’t take that stuff seriously; he sees it all as amusement and curiosity. He says things in response that reflect his utter lack of concern for criticism, that the criticism means nothing, that it’s just ground noise.

So if you’re getting criticized for the little things and you’re feeling like she’s trying to control you for reasons that are hers – don’t take it personally.

The ‘don’t take it personally’ mantra is really hard because it feels like a personal attack. But when you get into your Mojo, when you get into that masculine place of being her lover, you won’t hear her controlling criticisms or her negative comments as something that’s meant to dehumanize you or emasculate you and make you feel small. You’ll just hear them as a woman who’s tired, or a woman who’s not in a good mood or who is otherwise agitated.

It’s not all about you.

If you respond to her like you’re a little kid, you’ll only make matters worse. You’ll only get into yet another argument about another stupid thing.

So my advice for you today is to understand what it means to have lover energy.

You may not have felt that for a long, long time.

Many guys who’ve been married for a long period of time, have totally forgotten that early period of playfulness, that detached, non-reactive, unflappable, un-rattled nature that you had when you were first dating. There was nothing that she could say then that would make you feel bad about yourself, and you responded like a lover, playfully, with fun, totally un-rattled. That’s what I want you to know.

Now is the time for you to regain this strength, to re-learn that mode of operation.

What can really rejuvenate a marriage is you being bold and deciding to be a man who is coming from his lover energy and who responds to negative criticism and all those triggers that you feel from the stand point of a lover.

If you have any questions about this, email me directly. I will respond. I care about this and helping you through what you’re going through – I’ve been there and I can help you through it. So give me a call and let’s do it brother.

If you’re thinking you want some of that old lover energy back, I want to explain to you how you’re going to get it – apply for a consultation call with me or my associate coach Dan Dore. I guarantee you’ll feel better by the end of our talk.

This is also a topic we’ll be covering in depth in our next Group coaching program starting at the end of August.

There are incredible breakthroughs we make when men team up and work together.

It’s about feeling heard and understood maybe for the first time ever.

It’s about that calm, confident, peaceful feeling we get when we see the truth about our masculine power and ability to live what we dream.

And it’s about creating new connections and a support network most men don’t have before they die.

Here’s what some men said from the last program:

“I can’t believe it’s over. I can’t believe where you have taken me from. I am forever in the debt of you and my cave mates. You have all changed my life and given me back my mojo. Thanks is not enough!” – Joseph N

“Thank you for taking the time and having the balls to help make the lives of 9 other men so much richer for this experience. You have given us the tools to change ourselves and become truly great men. I will certainly miss this group of men who have changed my life forever. There is no price I can put on that. Thank you, thank you, thank you.” – Kevin G

“It’s been a mind expanding, life changing experience for me. I now have a group of brothers scattered across the world who have my back, some of whom I’d love to visit some day. “ – Steve H

I want to meet you, connect with you and build a life-long relationship with you. And I want you to want that with other men too.

We’ve already got some amazing guys from around the world booked in, You need to meet these guys. And they need to meet you.