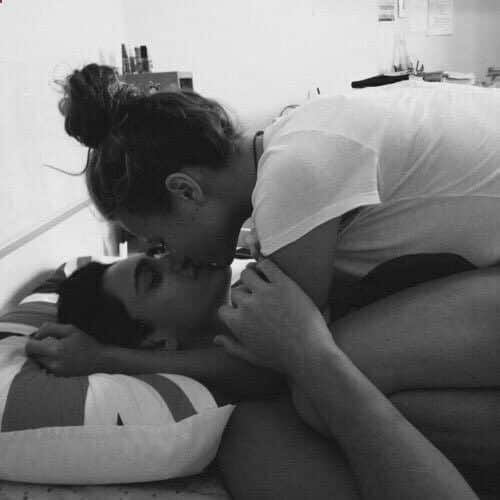 Have you ever tried to initiate sex and heard one of these replies?

Did you notice that none of those comments is a solid “No”? Yet, most guys I talk to take them personally and chalk them up as flat out rejection.

They immediately feel resentful and defeated.

And then come the sabotaging thoughts.

“She’s a cold hearted, affectionless, sexless pain in the ass.”

“She hates me, doesn’t desire me or finds me unattractive.”

“My sex life sucks and because of her it probably always will.”

Maybe that’s not you, but that’s what I used to think when I got anything but an enthusiastic “Yes”. That kind of thinking always lead me down the wrong road and things just got worse – day after day.

I’ve learned stuff since then.

There’s another way to think about what you think about rejection. If you change this you will make major improvements in your relationship.

What if she just needed your help in feeling sexy again?

Here’s a video, which explains another way to think about rejection.

This topic is coming up a lot lately. It has to do with sexuality and questions such as “How can I make my wife feel sexy again?” or “What does it mean when she says no?”

He’s just heard something similar to:

You hear all kinds of excuses from your woman when you want to be sexual with her.

Well what I want to talk about in the video today is – what does it REALLY mean? How do you get into a mindset where you don’t go into a downward spiral of feeling rejected and pouting and getting angry and resentful?

Because we all know that if you do that, it does nothing to turn a woman on.

So if you want to help her feel sexier, you have to change your mindset.

No doesn’t always mean no.

I’m talking about a marriage. A marriage where you’ve been together for 5, 10, 15, 20 years and the spark is gone. Everything is a kind of drudgery and it’s not really exciting and sparkling like it used to be.

But right now what she’s telling you is “I don’t feel all of that”.

Doesn’t that sound better than “No” or “we’ll see” or “maybe later”.

We start projecting things on her that she’s a controlling cold hearted woman. That she’s not sexual, that she doesn’t like you and she doesn’t want you. Yes, I know that those are the things that go through your head now.

But what if they’re not true?

I’m telling you that they’re normally NOT true.

The truth with all of us is that when we want to say “maybe” or “I don’t know”, it’s because we’re not convinced that we are that kind of person ourselves.

We’re not convinced that we feel sexy.

We’re not convinced that we are attractive.

We’ve got into this mindset of not really knowing what we want.

So give her the benefit of the doubt.

Giver her the benefit of the doubt that the does actually want to be sexual, that she does want to feel alive, that she wants to feel the blood pumping through her veins as an attractive and desirable, sexy woman.

One who can get on the middle of a dance floor and swing her hips and smile.

It’s like you’ve seen before in the old days, that’s still her, that’s all still inside her.

What if you looked at her like that and just chilled out?

So when you initiate sex or when you invite her to sexual intimacy or any type of intimacy, you’re coming from a place where you know that she’s already that woman, you’re not projecting negative stuff on her.

What can you do about you?

A lot of us guys, when you get 10 or 15 years into marriage, start approaching intimacy as something to win, like it’s a carnival game and you think all the planets have to align and you’re treading on eggshells.

You have this really tentative, really unconfident feeling about yourself. You’re almost expecting to get a no, so as soon as she says “maybe later” you roll your eyes and give up.

I want you to know that you ARE an attractive, desirable, sexy man.

This goes all the way back to pick up artistry and stuff from when you first met. The reason she was so attracted to you in the beginning, is because you had a degree of mojo. A sense of self-confidence, a sense of value, you weren’t overly invested in the outcome of her saying yes or no. And that was very attractive.

But when you get 15 or 20 years into marriage, you lose that mojo and you start seeing the act of sex as the end in itself. The act is the one thing that makes you feel better about you.

So what I want you to do is think about knowing that you are a sexual man, that you don’t need her to say yes to you right now, to make you feel good about yourself. You’re already OK.

And when you’re already OK and you know your value and you know that you’re a playful, confident man of mojo, when you hear “I don’t know”, “we’ll see”, “maybe later” or “I’m tired”, you don’t take it as a ‘hell no’ to you, you take it as a ‘hmm, maybe I need to step up my game’.

Step up your game and know that you’re a man of value.

Know that it’s OK to feel sexual and sexy and tuned on in your body and communicate that to her comfortably, without apology for being that way.

But most of all, without projecting the obligation on her to reciprocate it and to make you feel good.

And then, be playful.

Stay in that positive, confident mode of mojo that you remember you had in the very beginning.

This is an important mental and emotional shift we need to make when it comes to sex and intimacy.

As important as sex and intimacy are to a healthy, happy relationship, they are not the source of our confidence, happiness and masculine value.

But we often forget this and start acting in needy ways that only sabotage the trust, connection and attraction needed for intimacy.

Our ability to create trust, connection and attraction requires we show up with confidence, happiness and an awareness of our value.

If you’re not currently showing up – consistently – with a strong sense of confidence, happiness and personal value, you’ve got some work to do.

This is the work men do only with other men. I’ve committed my life to it and to you.

If you’re ready for someone to talk to – someone who has walked in your shoes and found the way through the mess… then go HERE to apply for a consultation call. I guarantee you’ll feel better by the end of our talk.