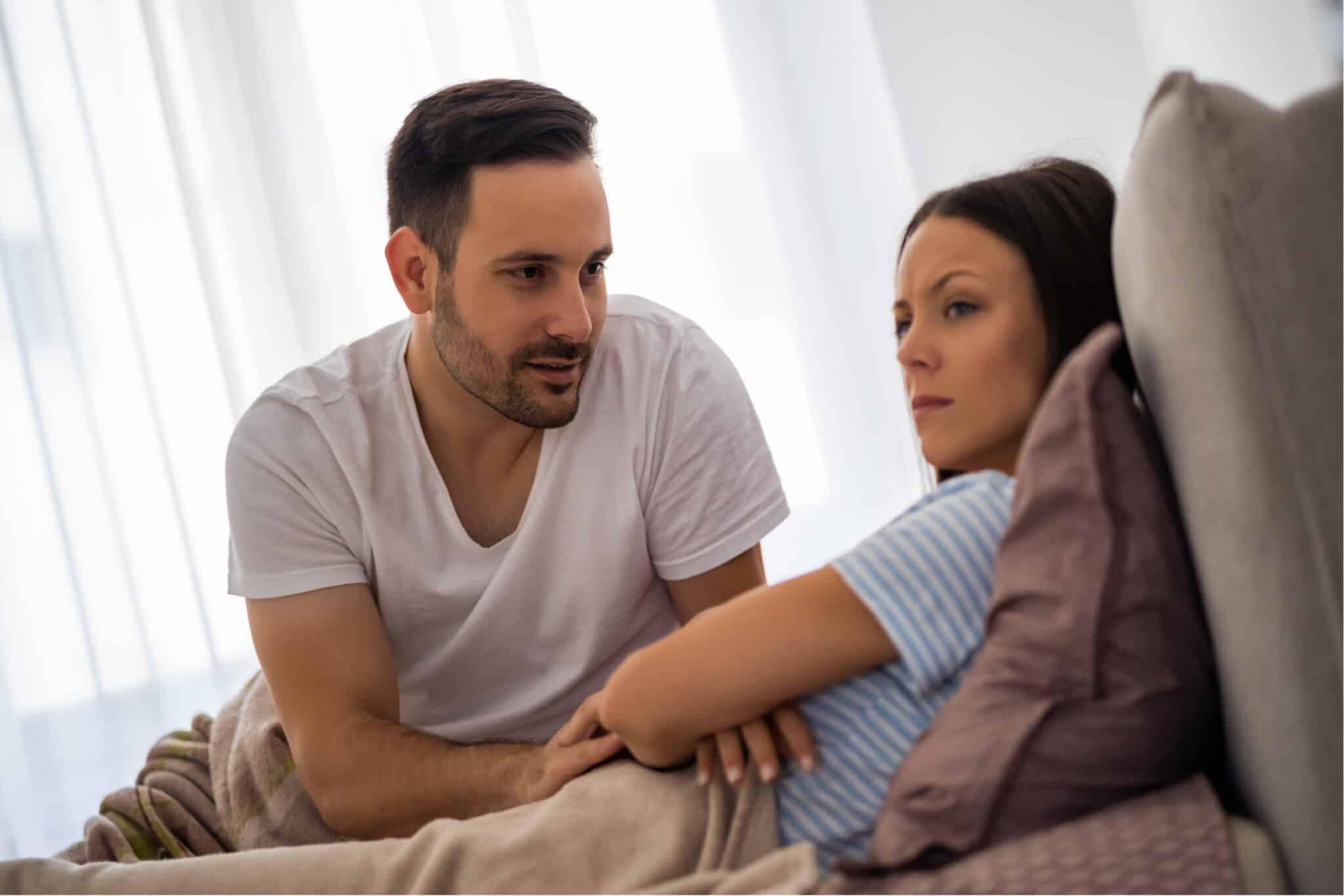 If you’re struggling with a disconnected marriage and wondering why your wife won’t give you affection, this article will help uncover some of the causes of an unaffectionate marriage and how to move things back towards connection, affection, passion and intimacy again.

What I’m about to tell you is so mind-numbingly basic you will probably think to yourself, “Wow, Einstein, is that the best you could come up with?”

Yep, it’s the very best advice I can give to a fellow man because I know how damn hard it is to stay focused on the basics. We tend to over-think and over-complicate matters of female love and affection.

If you golf you may remember the times you tried to focus on your feet, your grip, your club, your hips, your knees, your arms and the wind all at the same time. And then you shanked it. Ugh.

All you really needed to do was relax, watch the ball and trust your swing. Just three simple things. Do those three things consistently and you’ve got 90% of the game figured out.

It’s the same thing when it comes to creating an affectionate relationship. It’s not that complicated.

The basics matter more than anything else.

Your ability to be consistent in the basics is always more important than worrying about where the ball is going to go (the outcome). As soon as you lose focus on the basics the wheels will start coming off.

In this article, I’ll explain three basic mistakes which will cause you to “shank it” every time and then explain what you can do.

For the purpose of this article, I define female affection the way my clients describe it.

Female affection to us is any thought, word or action from her that feels kind, warm, loving, supportive, honoring, approving, accepting, respectful, cuddly, sweet or sexy. It’s the irreplaceable feeling of being wanted and appreciated. It’s a feeling of belonging and devotion.

You might say these same things apply to her equally. I’d agree, except for one thing.

Most of us will devour her affection even if she doesn’t really mean it. Even if she is doubting her own love and commitment to us. Even if it’s half-hearted. Most of us can’t tell the difference. And it feels so freaking good we just don’t care.

We want to believe it’s true, therefore we do so without question.

But we don’t have the same luxury. When we show her affection we better mean it.

Because she has a better bullshit detector. She is much more wary of the intent behind our affections. Because if we don’t mean it – it’s not real. It doesn’t count. It’s not affection to her. It feels like a game.

We will constantly struggle in our desire for female affection if we are disingenuous with ours.

That gets us started on #1 below.

3 Basic Mistakes that Kill All Wives Ability to Be Affectionate

Basic Mistake #1: Faking Affection (aka. You doubt your love for her)

This is so simple it’s ridiculous. Don’t fake it. It is pointless to expect any affection at all from a woman for whom your love is in doubt. Don’t play games. This mistake is the number one roadblock to genuine affection and intimacy. She will not risk giving you affection if she doesn’t trust your love.

Yes, marriage can be full of emotional ups and downs. Doubts do creep in and we must deal with them. The rule here is to make sure your affection is genuinely coming from a place of love. Not fear and not with strings attached. Better not to show any affection at all than to fake it.

And if you don’t honestly love her and adore her, you’ve got bigger problems than an unaffectionate wife. You should be asking yourself different questions. If you are spending time dreaming about your divorce, you’re in no place to be bitching about her lack of affection. I know – I tried that once.

This mistake is also simple but so hard to avoid sometimes. This is the smart guy’s tool of choice when the chips are down. It used to be my “go to” mode when I wanted to be right about something.

Whenever there is conflict or blaming going on, you deftly guide her though a strategic line of logic that leaves her feeling stupid – or least, feeling like you think she’s stupid. The affect is the same. She loses trust.

When you allow your emotions to invoke the intellectual warfare reaction, nothing good will happen. Ever. When we allow a conflict to move from a conversation to a court trial the “affection factory” closes for business.

I won’t go into a class on handling conflict effectively right now. Just remember basic rule #2. Never try to make her feel stupid. You’re stronger and more secure than that.

I wrote about this mistake in my article about the “Hummingbird Husband”. As I mentioned there, I’m a recovering hummingbird and I’ve lived this stuff.

This is the mistake of asking tons of questions from a place of self-doubt and insecurity. These are questions that have the underlying need of “please tell me I’m okay and that we’re okay”.

They sound like, “What’s the matter? Why did you say that? What did I do wrong? What do you want me to do? How can I make you happy?

To her it feels like a barrage of accusations – an interrogation of her devotion and commitment.

When she can see that you’re coming from a place of fear, distrust and doubt she can’t feel affectionate. I know, a great big hug of reassurance would be the best thing ever. Hell, how about some sex? That would be terrific.

I know where the conversation usually goes from here.

“I thought we were equals. Why can’t I rely on her strength when I need it? When do I get to be vulnerable without having to be strong for her? And what’s her responsibility here? What mistakes does she need to avoid?”

While you are equal, you are not the same in how you process facts, thoughts or emotions.

The only logical approach in a relationship with her is to choose to understand her.

But instead, we make the mistake of trying to either compete with her or fix her “faulty” programming.

When I’m working with a frustrated man who can’t connect with a woman, I usually find him trying to understand the problem from one narrow perspective – his. He tries to run everything she says or does through his filter of how people should work.

And nobody likes to be “should” on.

So What Can You Do?

While there are dozens of other ingredients that add to a thriving, affectionate relationship, without these I believe a man will struggle no matter what.

The 3 Basic Attributes of the Affectionately Satisfied Man

Basic Attribute #1: He Shamelessly Gives Affection and He Means It

He gives these things from a clear intention of love, honor and respect and he has no concern for what others think about his affectionate nature.

He doesn’t give his affection and then look over his shoulder for a positive reaction. There’s no hidden agenda for showing his appreciation generously.

He isn’t the least bit ashamed to give her – or anyone else – these things because he knows they have value. He knows this because knows he is a man of value, which leads me to #2.

Basic Attribute #2: He Doesn’t Feel Entitled to Affection – He Simply Creates It

Does this create pressure on those he invites into his life? Yes. But he won’t apologize for it because it’s simply his truth.

Because of his shameless willingness to give affection, he attracts and spends time with those who share his values. He believes in his worth as a man and husband.

He chooses only to be in a relationship that values mutual respect and consciously and continually fosters affection.

Basic Attribute #3: He Expects More from Himself and Others

The affectionately satisfied man doesn’t shy away from having expectations. He is under no illusion that it’s rude, wrong or controlling to have high expectations of himself and for himself. He doesn’t tolerate antagonistic energy from within and he doesn’t tolerate it from others. And his wife is aware of that.

She is with him because she also has high expectations and enjoys being called to her higher self. And vice-versa. Neither of them will play in the shallow end of life or marriage. They call each other to go deeper.

It can be an uncomfortable edge to push – always expecting more depth, vulnerability and connection. But they keep their standards high because that’s the life they believe they were meant to live.

What if Only ONE Person is Participating?

This is the obvious question.

It’s a very personal choice and I don’t believe there is one clear answer for everyone. But these are the questions I’ve had to ask myself.

Yeah, question #4 seems to be the toughest one.

But in my experience, questions 1-3 are actually much more difficult to answer. That’s why we jump straight to #4. It allows us to skip past our own accountability.

I’ve discovered that if I devote my time and focus on questions 1-3 I don’t need to ask #4.

I already know the answer to that.

If you want to learn more about how to be comfortable, confident and peaceful in your own skin, I’d love to help show you the way. Get started today, here’s your first step…

Go HERE to apply for a Free “No More Hummingbird” coaching call to learn exactly how you can start changing things tomorrow.

The Men’s Live Coaching Roundtable is a powerful collection of men from around the world working together to transform themselves and their relationships. Steve and Dan lead this community with 9 other professional coaches. We have live coaching video calls three times per month. The camaraderie in this group is something missing from the lives of too many men in the world.

Our online course How to Defuse the Divorce Bomb is a deep and intense dive into handling yourself when you hear, “I love you but I’m not in love with you anymore.” Tim Wade and Steve host monthly live Q&A calls with all the students in this course which includes many other bonuses as well. Find out more here.