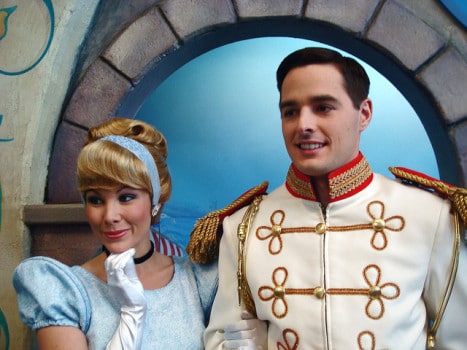 While we can’t always be fairy tale heroes from a Disney movie – expecting the best from ourselves WILL lead to more fulfilling marriages.

The Good Men Project ran an article called 5 Ways Disney Films Are Bad For Men. I admire all of Aaron Anderson’s work, but found myself saying, “yes, but…” while I read it. Based on my experience as a relationship coach for men, this is what I wanted to add.”

Here are 5 great points Anderson made and the “yes, but…” that I thought after each.

It’s not a man’s responsibility to make his wife live happily ever after. Happily ever after is when both spouses work together towards love and respect and help each other fulfill each other’s dreams. If one spouse isn’t happy, it’s not automatically the other one’s fault.

Yes! But…beware of the tendency to minimize her unhappiness or to believe that you have little to do with it. Frustrated, resentful husbands FREQUENTLY make the mistake of accelerating her unhappiness by saying and doing things in retaliation for their own unhappiness. No, we are NOT responsible for their happiness. But, we ARE responsible for choosing healthy, supportive words and actions that can give her the breathing room to step up for herself and make her own healthy choices.

Impact on Sexual Intimacy: If you believe intimacy is lacking now, watch what happens when you keep choosing to show her judgment, disappointment, and indifference. She will never be intimate with a man with that energy. She IS thinking about sex with a man who has the opposite energy.

Men aren’t always charming. Men have bad days. They have average days, too. Marriages where the man is expected to always be charming and dashing, and sweep his wife off her feet etc. are doomed for failure.

Yes! But…beware of using this fact as an excuse for not choosing to step up and BE an attractive man for your wife. It is not “charming or dashing” for a man to choose to consistently treat his wife with appreciation and respect. It is not a fairy tale man who enjoys lifting his wife’s spirits and giving her the pleasure of his own confidence and optimism without conditions. And it is totally okay for this man to calmly tell his wife he needs a little time and space to relax and work on his own emotional and physical health and well-being.

Impact on Sexual Intimacy: A man who consistently chooses to exercise his right to have a bad or an average day can expect his wife to consistently be LESS attracted to him. Mutually satisfying sexual intimacy is extremely difficult in a consistent state of negativity or boredom. A man cannot expect his wife to be attracted to him when he becomes a frequent “victim” of his own mood swings.

Men aren’t always courageous and brave. Some men would rather sit at home and read a good book, or play XBox instead of wrestling dragons or playing sports. Marriages where the husband is expected to meet all the stereotypes of manliness seldom work out because the wife is not seeing or appreciating her husband for who he is. She judges him based on stereotypes (aka objectifies him).

Yes! But…beware of the misconception that your wife MUST accept you exactly as you are if your self-expectations are low. Yes, she might have known you were a voracious reader and video playing junkie when she married you. But she did not know that meant you had no interest in taking charge of home maintenance problems or helping her to face, head on, your child’s educational and emotional health issues. It is not courageous or brave for a man to actively lead the charge in getting things done and facing conflicts directly. It’s his job as a partner and a parent.

Impact on Sexual Intimacy: A married man is entitled to his individuality and his pursuit of his passions and dreams with the expectation of support from his wife. He does not have the right to expect her admiration and sexual desire if he uses those as excuses to avoid being an engaged, involved, and consistently positive presence in the lives of his wife and children. Don’t expect your wife to lower her expectations in these areas if you expect to share sexual intimacy with her.

Men don’t fix every little problem. In the movies the prince would search every house in the kingdom just so the damsel could get her shoe back. Well, marriages where the man is expected to solve every little problem aren’t good marriages. Good marriages are based on equality where the husband and the wife both use their capacities to solve problems together. Both can do it on their own and often do. They collaborate when necessary but both have equal decision making power – and they both use them.

No, you don’t have to worry about fixing HER specific problems with her friends, mother, or boss or whatever. But in the spirit of equality and covering each other’s back, realize that you have a lot more responsibility than bringing home a paycheck.

Anticipating and taking initiative on problems like those above can build the trust, appreciation, and respect you may feel is lacking. This inspires collaboration and a shared work load within the whole family.

Impact on Sexual Intimacy: A married man who treats his responsibilities like “chores” is unattractive. A man who treats his wife liking a nagging mother will be treated like a little boy – also unattractive. A man who takes the initiative to own many items on the “To Do” list without being asked builds trust, appreciation, respect, and attraction. Sexual intimacy can flourish only when both partners feel those emotions. Resentment is a barrier to sexual intimacy and will grow when there is an obvious imbalance of effort on the “To Do” list. Don’t believe for a minute that she actually prefers to handle all of those details on her own.

Warning: Men who TRY their hardest to fix every little problem with the expectation of sexual rewards usually find themselves in the exact same boat as the under-performing guys. They are equally annoying and unattractive.

Men aren’t simply for marrying and making their wife’s dreams comes true. Wives who think this are selfish. As a spouse, their husband is supposed to help, but ultimately our individual dreams are ours to accomplish.

Yes!…Double Yes! But…realize that many men and women’s dreams start with a simple desire to marry someone who:

a. Loves them without judgment;

b. Appreciates them for who they are;

d. Feels a passion to share emotional, physical, intellectual, and spiritual intimacy on many levels

The new dreams become focused on things like money, career success, vacations, lifestyle, children, social status, and personal hobbies. If any ONE component of the original dream is suffering, the new dreams suffer as well.

Arguing, resentment, complaining, criticism, belittling, and personal attacks are all a part of the new dreams. Neither partner can understand or admit that it is the decay of their ORIGINAL dream that has brought them here. It is these feelings and behaviors that destroy the desire to support each other’s personal dreams of personal growth, variety, significance, and contribution in their lives. Some marriages go the duration in this manner. This is sad.

A man who understands this reality and his role in getting there, can change the entire dynamic. He can decide to redefine the “dream”. He can communicate this to his wife. They both can begin to speak and act in ways that rebuild the foundation for the original dream.

They can seek help in charting their new path. A new understanding and commitment to the original dream is what allows them to support new dreams. Meaningful dreams. Personal dreams. They discover that their unsatisfied needs in letter (d) above are usually a result of unsatisfied needs in (a) through (c) above.

Impact on Sexual Intimacy: A married man who gives up on or doesn’t buy into the original dream seldom realizes any satisfaction with sexual intimacy. He has failed to make the critical connection between the needs for authentic love, appreciation, respect -AND- sexual intimacy. When that connection is absent in a relationship, BOTH partners will attempt to satisfy it one way or another – usually in destructive ways – and usually NOT with each other.

My experience is as a relationship coach for men who are married to women, but I think any man who aspires to be his best and take responsibility for his own actions will have a stronger relationship for it.